The Lady Of Abbey House 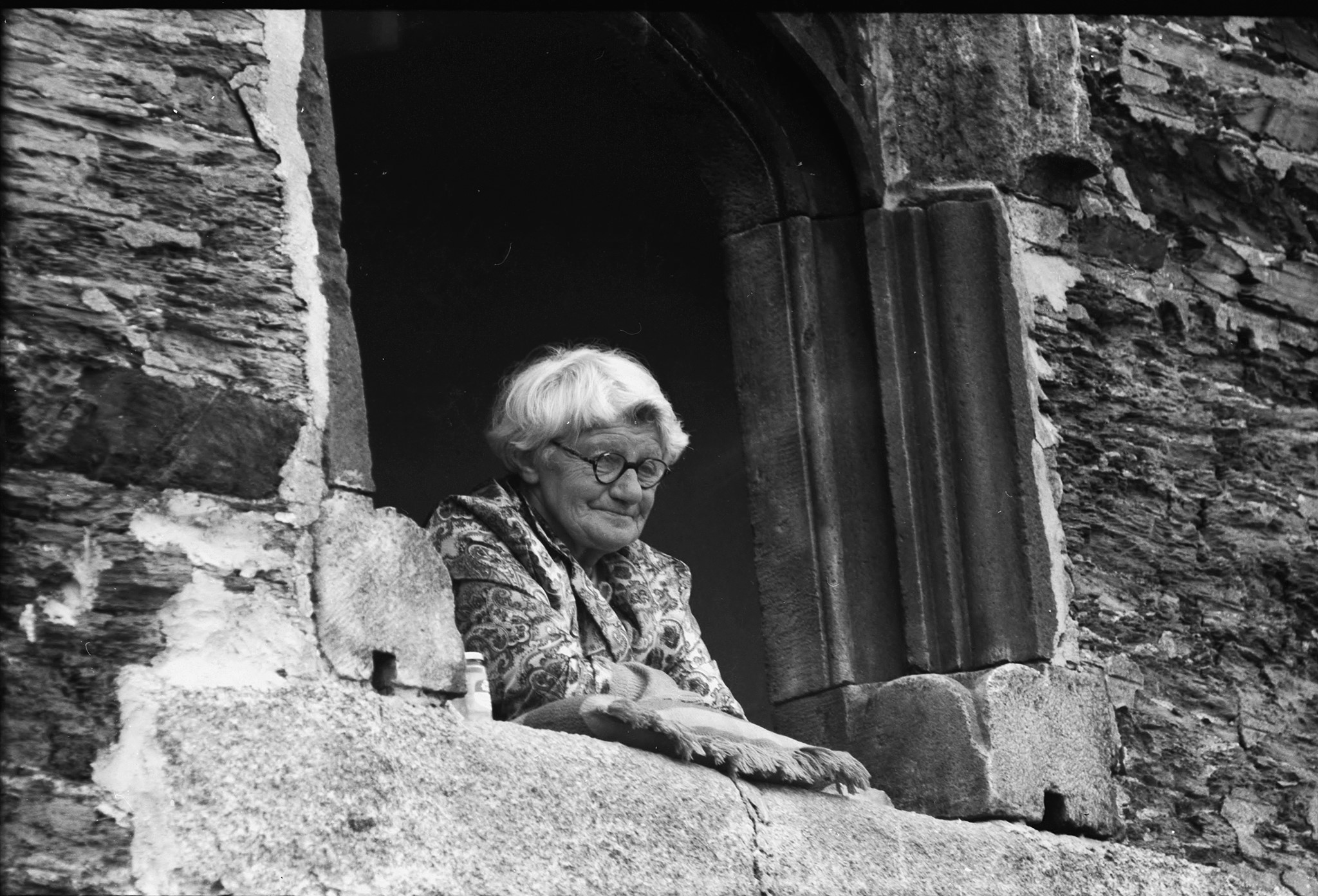 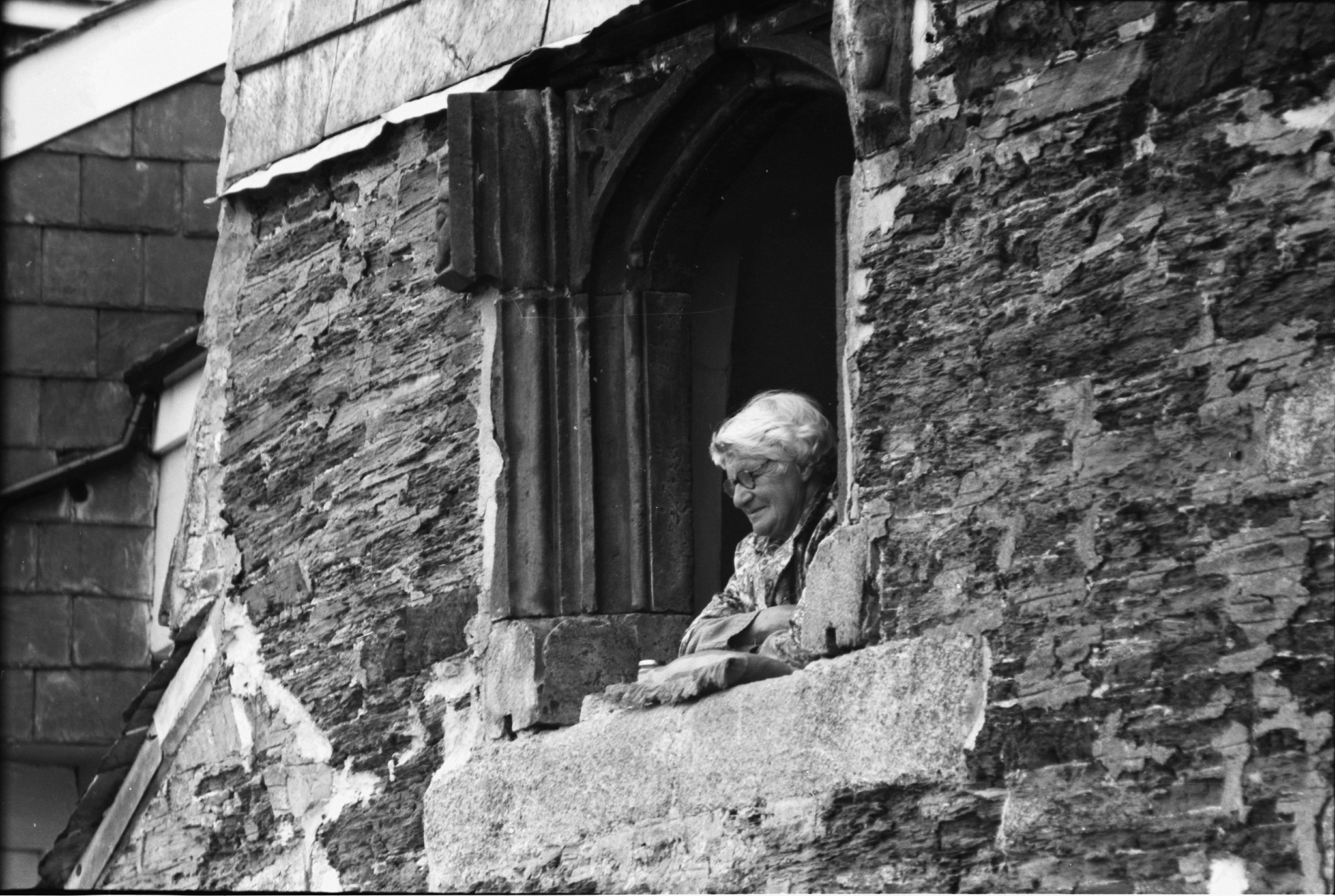 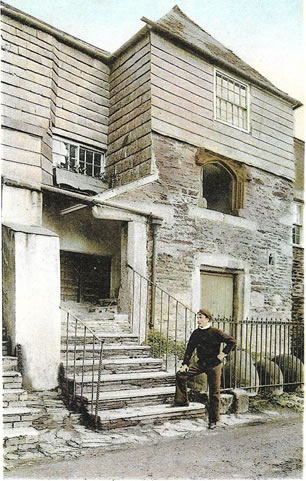 Note the Cloam ovens inside the railings 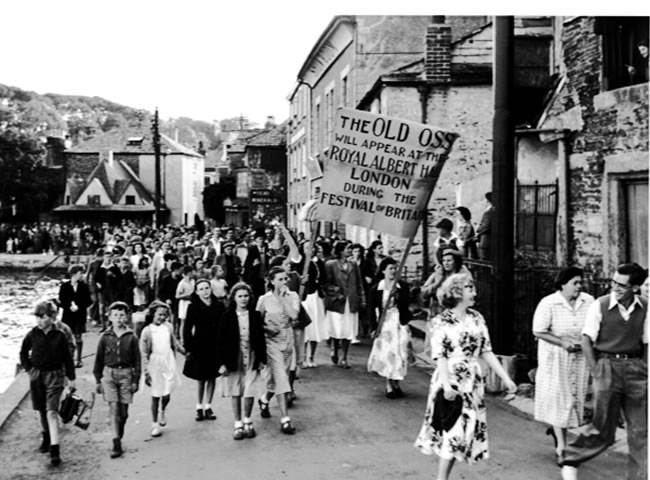 Mrs Simpson watching the parade. This photo would have been taken in 1951, the year the Festival of Britain was held. 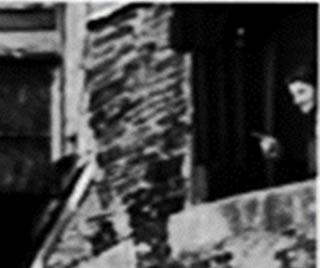 A Young Mrs Simpson watching the parade from the arch

Visitors to Padstow Museum often ask about the striking old building on the North Quay known as Abbey House.  Long felt to be one of the oldest houses in Padstow with a history going back to before the Prideaux family took over the control of the area from the Priory of Bodmin.  With its ancient Cataclew stone archway overlooking the inner harbour and rough doors leading to storage underneath and reputedly even a tunnel leading up to Prideaux Place, it stands out as a special place. Rented by the Prideaux’s to families with interests around the harbour such as the Nances and Carters it was, sometime in the 1930’s, rented to Harry Simpson and his second wife Annie, who when the property was offered for sale in 1938, purchased it. This began an association that would last until Annie’s death in 1981.  Her last years were coloured by her increasing erratic and irrational behaviour at her window, her stage. She died in hospital on 20th August 1981 Little is known of those early years in Padstow except that for a time one of her husband Harry’s sons from his marriage to Rose, Maurice Barrow Simpson and his wife Evelyn lived with them (1939). There was another son Arthur Barrow Simpson both involved in the family firm of ‘Livery Outfitters’ based in South Audley St, Grosvenor Square, London. All this information gleaned by recent Internet searches including the information that his first wife of 33 years died at Goss Moor Roche in 1923. It is known that Annie was a member of the Red Cross during the War and, post war, in the WRVS.  She is remembered driving an open top Standard 8 car. But what of her life before she married Harry Simpson. ? We start with the Census entry for Annie’s Morrell family living in Queens Park Paddington in 1911.

The Lady of Abbey House

Her father Charles Morrell is working as a general labourer and is 44. He and his wife Elizabeth have been married 22 years and Annie aged 12 has an elder sister Dorothy aged 16 and a brother John 14, both working in the ‘Slipper Trade’.  William 13 is at school, as are Annie, Lilly 9 and Violet 6. One last sister Ethel 2 is at home. We know Annie left school at 14 and went to work for a Wholesale Grocers in Farringdon Rd where she rose to a position of Ledger Clerk at the end of 1917, earning 35 shillings per week.  Her father was now in munitions work and in April 1918 Annie enlisted in the Queen Mary’s Army Auxiliary Corp as an admin clerk and typist. She would have worn the uniform of green or khaki jacket, skirt and cap. In Feb 1919 she was discharged on compassionate grounds and became a nursemaid. The next important piece of information we have is the Marriage Certificate of 27th February 1926 which took place at Eton Register Office between Harry Simpson aged 58 Widower, Master Tailor residing at ‘Chez Nous’ Ovalway Gerrard’s Cross Bucks and Annie Morrell aged 26 a spinster of the same address. We know nothing of what led up to the marriage of this working class girl and the wealthy widower.  We do know the couple went on a world cruise for the honeymoon and in a few years would find themselves living among us in Padstow. It would be easy to speculate on the many years Annie spent alone in her atmospheric old home on the harbour side after Harry died in 1947. There were many like her living quietly and managing their own affairs and for most of the time this would be her lot. Locals who came into contact with her noticed a change in her behaviour. She went shopping and visited the post office as usual but would be heard talking to herself as her mental health declined She had no family nearby and locals working around the harbour area did their best to protect her from curious onlookers who would see her at her ‘window’ and hear her comments on the world as it passed by.  The house was sold on and no one has lived in it since permanently for any length of time. Maybe that is rather fitting as there will never be another Annie Simpson.

John Buckingham Padstow Museum In response to the many questions.  I have attempted to answer some of them. Thanks to Glynis Kent for her Internet research.