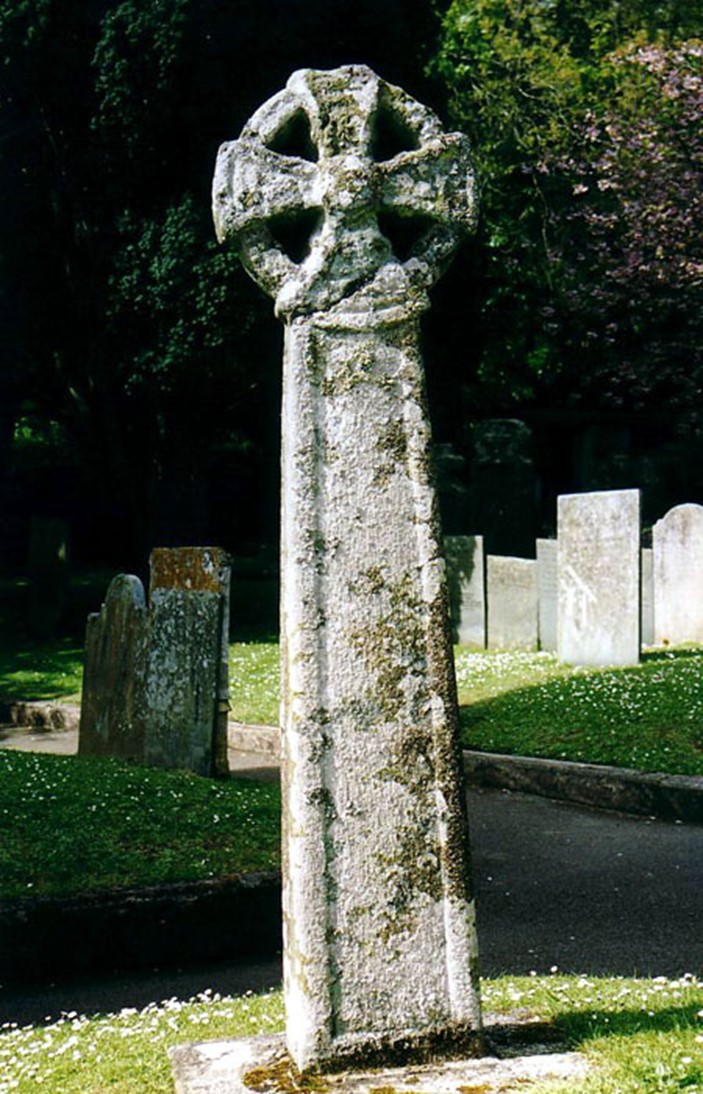 There have been three churches over fourteen centuries on this site.

The first was built by Petroc in the 6th century. The church, monastery and all it contained were completely destroyed by the Vikings in 981. There is a framed photostat copy of the entry in the Anglo-saxon Chronicle of King Alfred, on, the column by the visitors' book.

The only items from this early period are the head of a four holed Celtic cross on a modern shaft, outside the south door and the base of a very large cross by the south-east gate. This must have originally been deeply carved and most probably stood at the monastery gate. Before the Normans came the monastic establishment had moved to Bodmin. It is not known how long the church lay in ruins.

Another church was built, Saxon, with possible Norman additions. The lower half of the tower dates from this period and is 6ft. thick. During recent repairs to the wall at the base of the arch, dated by Pevsner as 13th century, crumbling beachrock or sandstone was found. This could indicate that the church of 1100 was built of this and that is why it did not last very long. The sealed doorway was the entrance to stairs leading to the tower. It is not known exactly when this church fell into disrepair. 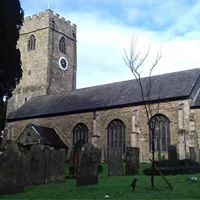 The cream stone for the columns came from Caen in Normandy, by sea. The dark grey stone in the windows and font is Dolerite which was quarried locally at Cataclews point near Harlyn Bay.

THE EXTERIOR AND CHURCHYARD

From outside it can be seen that the porch has been rebuilt at some time as there is the mark of a higher roof level on the wall.  On the South wall at the east end the very old figures either side of the Nanfant arms are a headless lion and the chained hart, badge of Richard II, 1377 - 1399, so they pre-date this church.

Lych Gate - (Listed in May 1988 Grade II) - on the south side of the church at the exit to the main town car park. 12 ft high by 8ft deep, built of stone with half timbered gable and slate roof.

Mortuary - on the south side of the church close to the Garden of Remembrance is built of stone with slate roof - recently fully restored.

NOTES ON THE INTERIOR OF THE CHURCH

Because of the similarities of designs of the carving on column capitals and ceiling bosses, it is certain that they were all planned at the same time. They consist of flowers, fruit and leaves and are simple at the west end, becoming more elaborate toward the east end and the high altar.

The nave aisle has a ceiled wagon roof, the north and south aisles open wagon roofs. These and the Lady chapel ceiling are original, but the chancel roof was renewed in 1900.

In the south-west corner is a large memorial to Sir Nicholas Prideaux, the 16th century builder of Prideaux Place. He is in Jacobean armour with his wife and four sons. Monument to Humphrey Prideaux and his four sons Nicholas, John, Edmund and Humphrey who are depicted in painted Jacobean dress.

A memorial to Sir Nicholas Prideaux of Solden who died in 1627 has subsequently been inserted near the top of the monument. The whole edifice is typical 16th century work.

The fourteenth century font has carvings of the twelve Apostles, three on each side, each identifiable by what he is carrying. At the four corners are angels with the book of life. There is some careful restoration to west side, as it was damaged by vandals. The sure sign of a medieval font are the remains of metal fastenings on the top.

We know that bells were being rung in 1632. A Padstow mariner called Nicholas Watts died on 21 August that year and stipulated in his will that 12 shillings a year was to be paid to St. Petroc’s bellringers to ring a peal on each anniversary of his death. This was done for many years and came to be known as ‘Watts’ Knell’. After a lapse of a few years, the custom was revived in 2015 and will hopefully continue.

We also know that there were five bells in 1716. Records show that in that year there was an ‘article of agreement’ between Christopher Pennington of Lezant and the Churchwardens of Padstow stating that he would maintain the five bells during his lifetime.

We know too that the bells were recast in 1798 and a ‘peal of six new bells’ made by John Rudhall of Gloucester at a cost of £162 11s 1d. The bells were transported to Padstow by sea.

The bells were rehung in 1922 by W. Aggett (Chagford) and again in 1952 by Taylors of Loughborough who currently visit us annually to check that all is well with the bells.

Each bell has an inscription, and these are listed below:

These bells were re-hung 1922 in memory of Sussex Charles Longford who died January 26th 1918, the cost being defrayed by a legacy from his father, Robert Sussex Longford, Church warden 1888 – 1920”

“Prosperity to the trade of Padstow 1798”

The church tower has six bells, recast by J. Rudhall of Gloucester in 1798 and brought to Padstow by sea. Re-hung in 1922 and again in 1952 by Taylor’s of Loughborough.

The details of the bells are:

In the lowest step leading to the north door is the impression of an old brass. Opinion differs as to the subject. It could be the elbow of a knight with a dog at his feet or perhaps a child.

About halfway along the North wall is a memorial tablet to a Dr .Marley who was a friend of Charles Dickens. The author borrowed the Doctor's name for the character in "A Christmas Carol".

Only the approach to the rood screen remains. This must have been very large, extending across North aisle and chancel and possibly the South aisle also. Musicians and organist would sit up here and the Priest would read the gospel from it at festivals. The stairs to it still remain in the North wall.

Near the Pulpit - details of past incumbents

A "wineglass pulpit", believed to date around 1530. All the panels are original, except one. The carvings are of various objects linked with our Lord's Passion.  The scallop shells at the top of the panels are all different in design indicating different carvers. The scallop shell was the badge of pilgrims travelling to the Shrine of St. James at Santiago in Spain. Padstow was possibly the port of embarkation for them and their offerings no doubt helped to build the church. 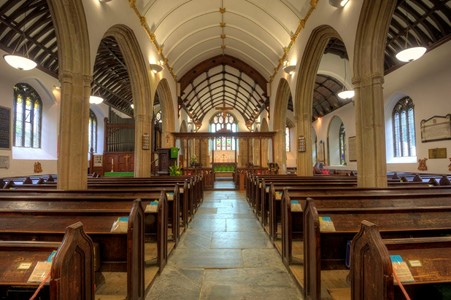 The present screen dates from 1900. The carvings on the screen echo those on the pulpit, which is one of the church's treasures. Presumably the wood-worm, so prevalent in Cornwall's humid climate, had disposed of the medieval screen as they had also demolished the old carved bench ends.

On the screen is a carved crucifix from Oberammergau, this was brought back to Padstow by a party of pilgrims who had been on a visit in about 1900.

On the north side of the chancel is a 2 manual organ with tracker action manufactured by Telfer of Dublin. Re-built by Hele and Company in 1893. The electric blower installed in 1938, a Gift of George Sloggett. The Organ was overhauled in 1977 and the electronic action was fitted in 1993.

The speaking stops are:

The East Window - Behind the High Altar.

The main East window is modern, made by Gerald Smith in 1958, shows Christ in Glory, St. Petroc with rescued deer and King Arthur. The four small stained glass windows in the tracery of the East window are remains of the Victorian East window made in 1843 by William Warrington, representing Matthew (Angel), Mark (Lion), Luke (Bull) and John (Eagle).

Above the East windows are beautiful carved canopies. The Canopy with the coat of arms with three fishes is the badge of Bodmin Priory. The canopy with bow, arrow, sword and two peculiar hunting horns is a badge representing St. Petroc, the first Abbot and founder of Padstow church. The window is in memory of members of the Prideaux-Brune family. Left side:- St. Petroc, badge of Rifle Brigade, "In memory of Charles Robert Prideaux-Brune J.P. D.L. Lt. Col. Rifle brigade b. 10 Oct 1848 d.11 Dec 1936"

Either side of the High altar

Stone slab with ornate Victorian Gothic surround with elaborately carved sides and canopy showing the Ten Commandments on the North side and Creed and Lord’s Prayer on the South side. Both are painted in Gothic script.

To the right of the altar, in the wall, is a holy water stoup with a crude carving of St. Petroc in monk's habit, at the top. This is the earliest representation of him and would probably have been placed in the porch of the old church and inserted here in the new church for safe keeping.

To the left in the chancel step is a very early brass of the priest who was incumbent when the present church was being planned. Lawrence Merther died in 1421 so did not see the church completed. During restoration work in 1900 this brass was found concealed and placed here.

The Lady chapel was a separate chapel (according to Cooke's travellers guide of 1830) divided from the main church by two piers supporting an arch. The present arch and corbels are the only late renaissance work in the church, so it is presumed this is when the chapel was opened up. It contains the War Memorials for the parish.

Behind Our Lady's Altar is the double Aumbry which contains the Blessed Sacrament, the consecrated bread and wine which is the Body and Blood of Jesus Christ, reserved for the sick and as a focus of prayer. To remind us that Christ is always present in our Church in the Blessed Sacrament, a lamp is always kept lit nearby. It is very rare to have Anglican and Roman Catholic Aumbries next to each other, the Anglican one was given by the Revd. Barry Kinsmen in memory of his mother Winnie Kinsmen (1911 - 1986).

The Lady Chapel is thought to have been refurbished by the Nanfant family as a thank-offering; their coat of arms appears on the exterior of the South wall. Sir John Nanfant was Henry VIlI's Ambassador to Portugal and High Sheriff of Cornwall. On returning from one of his voyages he was nearly wrecked off Cape Cornwall but managed to reach the Padstow estuary.

The stonework of the windows is more flamboyant than the rest and they are probably of continental workmanship.

The East window of the Lady Chapel is a memorial to two former vicars, the Reverend William Rawlings 1790 - 1836 and the Reverend Richard Tyacke 1837-1896 and is unusual in having no figures, consisting of various texts from the Bible. Gerald Smith made the two windows in the South wall of the Lady Chapel in 1932 and are in memory of members of the Prideaux-Brume family.

On the wall near the south door there is a memorial tablet to the crew of the Albert Edward Lifeboat, lost on the 6th February. 1867

Baptism, Marriage and Burial Records are complete from 1670 and are now lodged in the County archives in Truro.