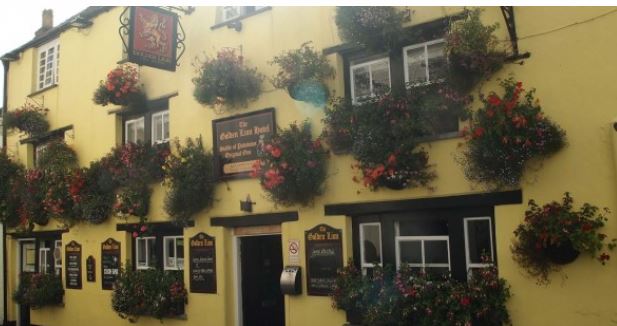 Hot on the heels in importance of all our historic buildings in Padstow next to our ‘Big House’,  Prideaux Place, and the Parish Church, come Abbey House and Raleigh Court House.  Next in line come the Public Houses and one stands out as having been around the longest in the same building;  The Golden Lion in Lanadwell Street.

With this text comes some detail from the 1842 Tithe Map showing the configuration of the building as it was then.

The list of Inns and Public Houses in the 1830 Pigot’s Directory includes The Ship which was on the site of the present Ship Hotel and the London Inn, which was at another site.

If walls could speak there would be countless tales to tell of shipwreck and smuggling, fish catches and journeys to far off places.  People gathered in these places to do business and to meet friends.  Sometimes to stay the night.  Ships Captains could find a comfortable bed and a change from shipboard rations.   In 1881 when the Census was taken several masters of Pilot Cutters from Pill in Somerset found themselves a bed in the Golden Lion.  Most would have been forced to stay on board ship as accommodation was limited.

Census returns give us a unique glimpse of the occupants of a property on that one day every ten years.  William Betties aged 50 was the Landlord; with him his wife Elizabeth (53), unmarried daughter Ellen (27) who worked as a Dressmaker, her sister Emily (24) described as an Inn Servant.  There was also Thomas Pearce a nephew.  And the visitors George Harry ,Joseph Adams and Thomas Thayer, all masters of Pilot Cutters from Pill.  Percy James from Lostwithiel was also listed.  Quite a house full.  The Pilots on board their Cutters escorted sailing ships up to the Port of Bristol and ranged down this way in search of customers, a hardy bunch.

From old newspapers we read that The White Hart in New Street (now a private home) was being offered for sale in 1746 and by 1773 was described as the only Inn in the town.  Not many years later in 1784/5 advertisements appeared describing sales taking place at The Golden Lion - most likely in the Long Room recently restored to form attractive living accommodation.

November 1784 at the Golden Lion

2 o’clock in the afternoon

For Sale by the Candle

Burthen about 80 tons more or less

French Built (about five years since) a very fine sailer and very well found having had near £100 expended in repairs and materials on her within the last two months.  Inventories may be had and the vessel viewed by applying to Wm Rawlings and Son, Merchant, Padstow

The Rawlings family owned ships and lived in what is now St Petrocs Hotel.  They ran The Padstow Bank and built a mansion, since pulled down, at Saunders Hill.

In 1816 Six tons of salved Spanish Wool was being auctioned and in Dec 1819 540 Barrels of Prime Scotch Herrings were being offered.

The Long Room was where The Bible Society forerunners of Methodism held their first meeting on 15th October 1812.  There would be differences between the suppliers of ‘strong drink’ and the teetotal movement for most of the century; most notably in Padstow when the Bible Christian Thomas Tregaskis of St Issey tried to stop May Day.  He did not succeed and Inns continued to trade despite so many of the population, on paper at least, ‘signing the pledge’.  Some licencees reported much increased business especially when there were mass rallies of  teetotallers.  Read into that what you may.

In his book ‘Old Cornish Inns’ H.L.Douch mentions a William Bazeley as Landlord in 1810 and Caleb Boney in 1822.  Caleb was well known as a clever clock maker as his astronomical clock at Prideaux Place will testify.  Indeed his gravestone in Padstow Churchyard claims he was ‘Deservedly celebrated in this county for his proficiency in Astononomy Mechanics and Music’.  Praise indeed.  His son also Caleb may have been the  landlord as well, as he is described as a Victualler as well as Clockmaker, Ironmonger and Tallow Chandler.

In The Padstow Echo No 38 from 1975 we learn from an article by Tom Hawken Sandry of St Ervan that his great uncle Peter Sandry purchased the Golden Lion from Caleb for just under a thousand pounds and added another storey to the building. He added ‘the late Mr Fred Williams told me that his grandfather carried out the work for him’.  It included several cottages at the rear which ‘remained the property of the Sandry family along with the Golden Lion until the 1930’s when it was sold to the Redruth Brewery’.  During some of this time Elizabeth, the widow of John Sandry, who had been running a foundry and engineering works at Flushing near Falmouth, returned and managed the Lion for her brother in law.

I attach notes made by the H.L. Douch on the history of all the pubs in Padstow bearing in mind that when he wrote it in the 60’s neither the present Shipwrights or the Custom House Hotel had been created.

During WW1 laws were introduced restricting the times that alcohol could be sold in pubs.  It was considered 12 till 2.40 for lunchtime and 6.30 till 10.30 was sufficient.  The ringing of a bell and the familiar call ‘Time Gentlemen Please’ would be called.  It was not until the 1980’s that it became 11am to 11pm and 2005 when all day became the norm.  Tales of ‘Lock Ins’ abound from these times.

My memory goes back to  Mrs Couch and daughter Winnie holding the fort in the war years 39 – 45.  They were  followed by a Mr Gatford then Len Cocks and Margery from 1958 till 1966 when Tony and Jennie Hawken took over.  Then came Alan and Caroline House, then Bill and Silvia Newcombe, followed by Alec and Lorraine Rickard on to the present day Martin and Sarah.  Ownership passed from Redruth Brewery (acquired by Devenish of Weymouth in 1934) to the Rickard family in that time.

Many changes have taken place in Padstow during that time and shops and pubs have been part of that change. My earliest memories are from the 1960’s.   I remember a passage running alongside the bar where one could buy drinks without actually entering the bar itself.  So much now opened out to create a welcoming space while still retaining the atmosphere.  The low bar ceiling is an endearing lasting memory.

In those days I used to go in search of the singing that used to go on from time to time in most of the pubs around, particularly in the Caledonia - frequented by old time seafarers and run by the bird like Mrs Lloyd.  Saturday nights in particular were magic to this wide eyed young man in his twenties clutching his glass of Mackeson Stout.

The Lion too played a part as later,  in Tony Hawken’s time they hosted the ‘Rogues Corner Folk Club’ in the Long Room behind the pub.

Of course nothing identifies the Lion more strongly in the public imagination than the association with the ‘Old Oss’.  In fact in 1911 when there were three Oss groups in the town they all met here at 8 am in the morning.  (see Ossy League poster).

After the Blue Ribbon Peace Oss was established in 1919, the Old Oss continued to be stabled at the Lion and it is from here that the Night Singing element of the May ritual begins at midnight on the 30th April.  To say the whole town is buzzing is a bit of an understatement.  May Day is here and the Landlords and staff in all the pubs are prepared for a hectic day.  Gallons of Beer will be consumed and considering the numbers of people that descend on the town there is usually little trouble.  An invasion of hippies in the swinging sixties did ruffle feathers somewhat but both Oss groups have learned to cope with the crowds and it continues to be a happy family occasion.

A picture taken by George W.F.Ellis of The Cornish Guardian, inside the Lion, shows Alan Lomax the American Folklorist leaning on the bar,with Colonel Bate behind him.  This was taken at the time of filming of the ‘Oss Oss Wee Oss’ documentary  along with Peter Kennedy (1953).  This brought May Day to the attention of the world and made a minor ‘Folk Music’ celebrity out of Charlie Bate, the talented accordianist and singer who played a lead part.

Gone are the days when the Oss was stored above the Landlord’s car in the garage.  A splendid meeting room just for them has been created just up the lane behind the pub.

What of the future ?  Given the popularity of the area and Padstow in particular as an all year round destination, it can only mean continuing good business for the likes of the Lion.  Alright, it can be a bit grim in the winter months, but there is much to enjoy - including the warm hospitality on offer in places like the Lion.